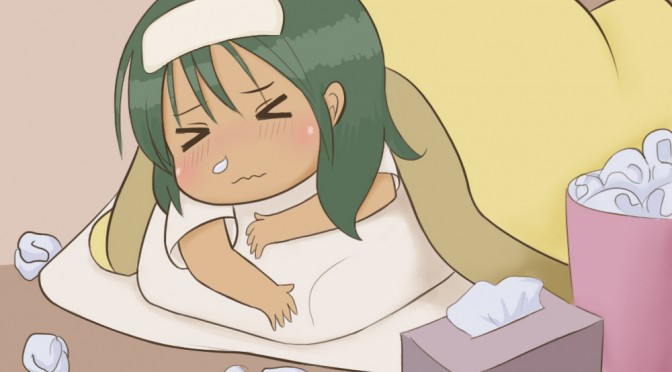 I managed to get sick recently over Labor Day weekend. it came at a bad time since I was planning on buckling down and getting some things done. But I figured I could work my way through the blocked sinuses and fatigue. Quite frankly, I had a lot of shit to do and only 24 hours in a day, so yeah, I couldn’t afford to let a mere wimpy cold get in the way. It wasn’t something that could stop a fella from pumping out a blog post or a drawing or two, right?

I think I put up a valiant effort. But it’s easy to underestimate just how much energy gets sapped out of you from a cold. Plus, when your face feels like someone shoved a bicycle tire inner tube into your nose, and this sadistic bastard is constantly pumping air into your new inner tube nose, and you’re like, “Hey, that’s my inner tube nose I’m trying to breathe through”, and they’re like “Yeah well that’s my tire you’re breathing through and I think it needs more air”, and… well… you get my point.

When I started to get better and reached a point where I could sit down at my computer and type semi-coherent sentences, I realized that actually coming up with something to write about was now an issue. I had nothing, and I didn’t want to just talk about my day. I wanted to write about something interesting/fun/thought-provoking. That’s when I realized I had pretty much hit a wall.

Creating any sort of content felt like pulling myself through a sea of grimy, unappealing muck. I thought about a million things that I actually wanted to draw. But the actual doing never seemed to happen. Don’t even get me started on the profile picture that was supposed to be done like a week ago. It stares at me like I’ve done the equivalent of burying it deep in an old mine, and then tried very hard to forget it even exists. That’s kinda how it’s going. The problem is that I was already finished and satisfied with the line art that I made. But once I figured out that certain parts of it didn’t exactly work, it was hard to get myself to sit down and fix it. Do all people who aspire to be artists go through this? I feel like it’s a personal issue that I’m not sure how to fix on my own.

I really want to make this site work. I feel like this is the only thing I have going for me at the moment, and not working hard on it isn’t an option for me. At least I don’t want it to be an option. So I sat down with the gf the other night to kind of plan out some goals. I felt like having a list of short term goals I can shoot for would help.

So far, I’ve missed my first week of goals completely.

So everything has been pretty hit or miss. I’m trying again this week to stick to my goals somehow. I’ve started with some limited success. Even if I don’t particularly want to write about my lack of motivation at the moment, I think it’s better to produce something rather than nothing at all. But it seems every other post on this blog is me talking about my lack of motivation. Thinking of renaming the site to Motivational Leaking.

And with that, off I go to try to force myself into actually doing something other than watching Youtube. Ah, also here’s a doodle I’ve done specifically for this post. Enjoy.