Ever heard of a game called Final Fantasy XIV? I have. I even helped work on a fansite about it. Oh, it’s just a little unknown site called Zantetsuken. Maybe you’ve heard of it? Okay okay, so I’m going to drop all pretense here. Yes I play FFXIV. It’s probably the only game I’m really playing seriously right now. When I decide to play a game that requires more than my finger and a phone, it’s normally FFXIV. I’ve actually been with it ever since the beginning, from its less than stellar first iteration under Hiromichi Tanaka, to its rebirth under Naoki Yoshida. Yup, me and FFXIV share some history together. And that brings us to Zantetsuken.net.

Zantetsuken started as a labor of love between me and Calaera all the way back in 2010. It began as mostly a space for news, articles, and blog posts about all things FFXIV related. I think the closest thing you could relate it to would be like an online magazine, and I tried my best to treat it as such. Our podcast about Final Fantasy XIV, Sequence Break XIV, grew out of it, and at some point we even brought on people to serve as writers. The hope was to have some support in producing content for the site, but things never quite gelled together the way I’d always wanted. The writers soon had other obligations to attend to, and I got increasingly busy as well. We were starting to fall behind. Big time.

So, when things got to the point where we couldn’t even keep up with basic news updates about the game, Calaera and I decided that it was better to put the site on hiatus, rather than watch it flop around like some wounded animal in the middle of a road. Overall it was probably the best decision. We said that we could potentially bring the site back in the future, and maybe we could. But Zantetsuken itself would need to be revamped, and we would have to meet some specific goals before I felt comfortable with its return.

The collaboration of two

Zantetsuken has always been a joint project between Calaera and I. In the past we’ve offered positions to other people and brought in writers, but it always came back to being something between us two. That’s why if we move forward with the revamp of Zantetsuken, I’d want to create a space where we could both have exactly what we want from the site.

My focus is generally more on longform articles and news stories. Calaera tends to focus more on opinion pieces and general blogging about the game. So if Zantetsuken returned, there would have to be room for all of that, plus room to grow into other ideas and interests.

I also know for a fact there’s no way I can produce the rich breadth of content I’d like Zantetsuken to have on my own. News, guides, commentary, feature pieces– those are the kinds of things I’d always wanted to see. Honestly, I wanted Zantetsuken to be like a real online magazine. But I don’t have the time or patience to create guides myself. And with everything else I’m doing, commentary and feature pieces would be sparse at best.

To get what I really want, I would honestly need to have other people submitting content. But it’s hard to find people compatible with us who can also deliver a decent piece of writing. Yeah, I’m that guy. I need someone who can write well and who has something to say. Otherwise, there’s just no point.

So, it’s either we devote resources to finding people willing to write for their hobby and no pay, or Zantetsuken returns with a much reduced focus. That is, strictly news, blogging, and the occasional article.

However, before we went on hiatus, that’s basically what we were doing anyway, and we still fell behind. So, who knows. We’d really have to rethink how we do things either way. Maybe Zantetsuken can survive as a blog rather than an online magazine, but a lot of thought would have to go into how we can stay kept up with important news without getting other people to do it, because Calaera and I are both very busy as it is. It’s a discussion we’ll have to have some time in the future, but if anyone has any suggestions or ideas, well I’m open to that, too.

I wanna be that webcomic guy

There are other projects I’ve been thinking about related to the game and the community. I still want to try doing a FFXIV webcomic. And yeah I know I’ve been saying that literally for years. The problem with that is just sitting down and starting. I’m sure it’ll be time consuming, but no more than me wasting time on Civ V, or watching anime and reading manga until 5 am in the morning, which are things that I do on a regular basis. Setting your priorities is a thing, kids.

What I really want to do is start a series on this site where I go through the process of developing and producing the webcomic. You’d be able to see my ideas for characters, settings, and stories, and then I’d be able to show how I refine it at all into a coherent finished thing. I’d want a lot of user feedback if I did it that way, although at this stage of the game I’m not sure exactly how much user feedback I could count on. But it’s still something I’m actively thinking about.

I did do some preliminary sketches of a main character when I was thinking about a webcomic idea. 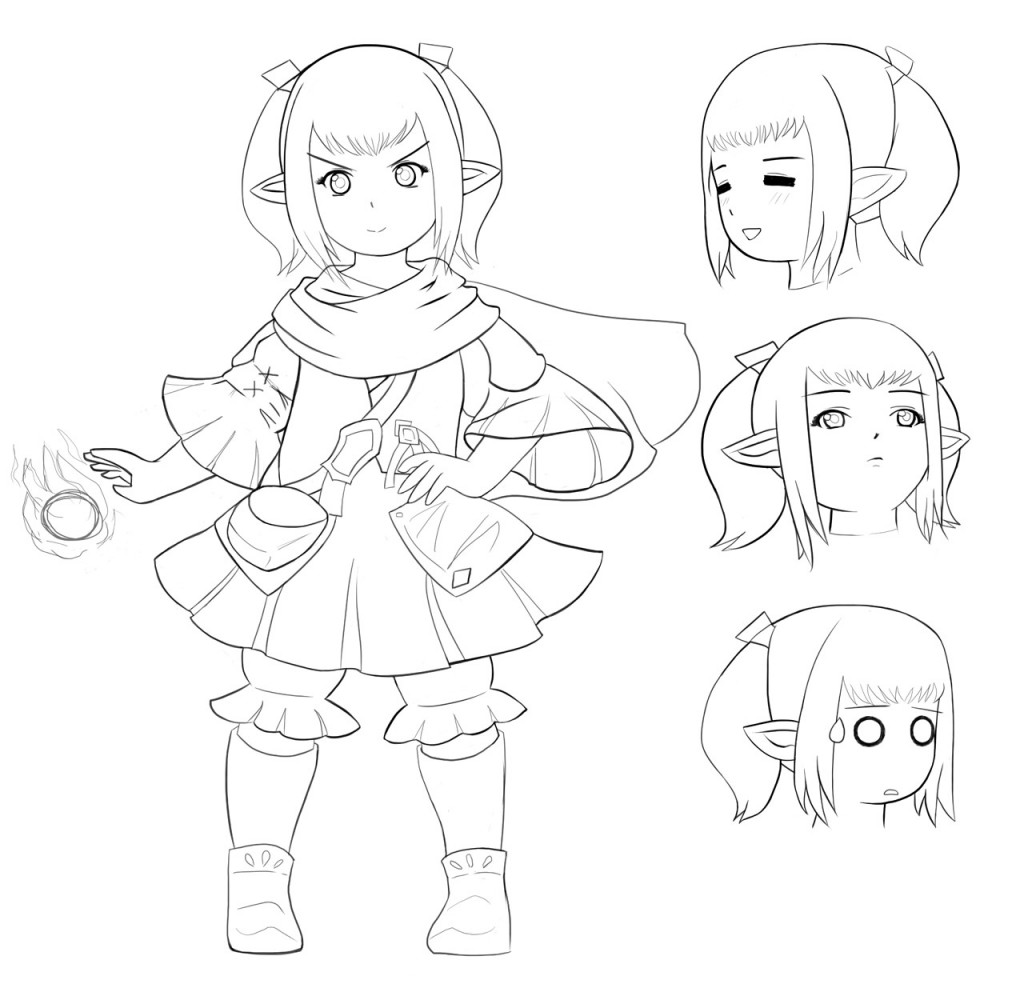 The webcomic was supposed to be called Parley Lessons and the MC was going to be based on a somewhat heightened version of Calaera. But because I was so slow, someone already came out with a webcomic whose main character is a lalafell girl with pigtails. Soooo, I don’t know if I can bother with that design anymore, at least. Props to XIV Nom Nom btw, the artist in question. I don’t read her webcomic because I worry about being influenced by other people’s work before I’ve even started on my own. But I heard it’s really good, and I like supporting other artists.

Hanging with the community

I’ve got literally zero love for the official FFXIV forums. I did comment there for a while, but at the time, it was filled with so much ridiculous stupidity that I just gave up and never went back. I only go there occasionally for reading updates and things, and doing research for the podcast. Despite that, I still consider myself part of the FFXIV community, and I still want to contribute somehow. I want to create something that makes a difference for people, hence why I’m always thinking about projects I can do.

The most recent thing I thought of was a FFXIV blogger directory. The idea is to create a site where people can go and find out the latest from their favorite blogs in one place. Members of the site could add their own blogs, rate the best ones, vote on featured posts, etc and things like that. It would be a lot of work for me to do, but I feel like it would be worthwhile.

I mentioned the idea on twitter and got a few responses.

I'm kind of considering producing a FFXIV directory style site for #FFXIV bloggers. Does this idea have any legs? Any interest out there?

The problem is, someone pointed out to me that Tarutaru Times Online is still active, and they cover FFXIV blogs as well. What I wanted to do with my directory idea is probably more full-featured than what TTO probably is, but it’s made me rethink whether or not I should bother. For one, I like to support sites that are already out there doing things. If TTO is the current directory for FFXIV bloggers, then I don’t mind letting it be the directory. Secondly, the thing I want to create will take a lot of time and effort, and probably wouldn’t come out for quite a while, so there’s that. My mind keeps coming back to the idea, so who knows, maybe I’ll take the plunge one day.

And I guess that’s the end. Nothing is really decided in terms of bringing Zantetsuken back, or any of the other projects I’d like to work on, but this has been pretty good for getting my thoughts together. I’d really like to hear some feedback on some of the things I’ve talked about here, so if you read this, don’t hesitate to leave a comment. Sometimes it takes an outside party to give you the perspective you need. Till then, I’ll be weighing my options carefully and discussing things with Calaera. Hopefully if Zantetsuken comes back, it’ll be better than it was before.